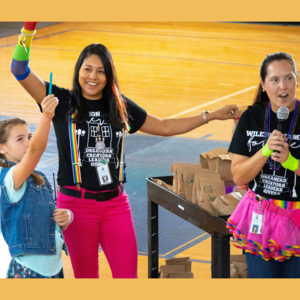 Wilemon STEAM Academy students slid into the new school year on an inflatable slide not only to commemorate the first week of school, but to celebrate the house they will belong to until junior high.

Wilemon utilizes the “house system,” which is inspired by the Ron Clark Academy, an Atlanta-based demonstration school with national and international recognition for its success in student education with academic rigor and passion, balanced with high student expectations.

All students and staff are a part of one of the four houses – Dreamers, Creators, Leaders, and Givers.

“The students that have been here since the beginning stay in the same house every year,” explained Wilemon STEAM Academy Principal Kate Authier. “So today is a special day because all of our new students and staff slide in to see what house they are in, and everyone welcomes them.”

During the house ceremony, students danced, cheered for one another, signed their house posters, played with LEGOs and balloons, and of course took extra turns down the slide.

Assistant Superintendent of Elementary Learning Lisa Mott said, “It was great to see how excited the Wilemon students were to join their house. The house system is a great way to motivate students and is part of what makes Wilemon and other participating elementary schools special.”

Throughout the year, students attend specials classes with their house peers. Students gather once a month for house meetings, which include student recognitions, service projects, team building, and leadership activities. Block parties at the end of each semester also take place with large celebrations with bounce houses, special guests, and exciting activities.

Authier said the house system has increased morale on campus and demonstrates a family atmosphere between students and staff. Since the implementation of the system three years ago, Authier said the program has “…built relationships across grade-levels and across classrooms. Everyone knows everyone else’s names, which opens up student-to-student and student-to-teacher mentorships. It’s been a really, really great program.”